Welcome to the world of Fairy Eater Chess 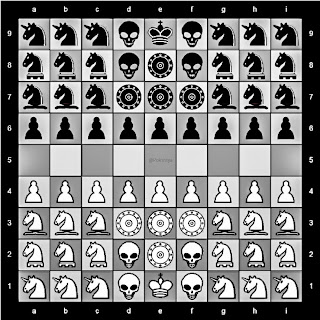 Welcome to the world of Fairy Eater Chess - a fairy chess variant invented in winter 2021  by the chess composer Vadrya Pokshtya (Sergey Kulelyaev).  Fairy Eater Chess was first published in Russian on the ASHSHI website   http://playashshi.ru/forum.php?t=575  and then in English in the author's blog at chess.com   https://www.chess.com/blog/Pokshtya/fairy-eater-chess *** Prologue Two Sorcerers with their faithful henchmen met in a fierce battle for the right to possess the souls of mortals, imprisoned in eighty-one caves hidden from prying eyes deep under the grandiose battlefield. *** Fairy Eater Chess Pieces The fairy pieces in Fairy Eater Chess have their own names giving the game the necessary ambiance.
Post a Comment
Read more 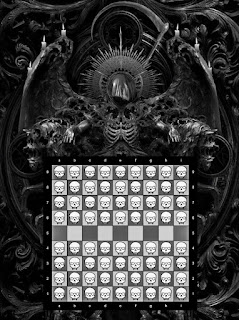 Challenge the Fairy Eater  if you dare. *** The game uses a board (9x9) and a standard set of pieces for Fairy Eater Chess. Each player controls One Sorcerer, nine Pawns, four Shields, four Ghosts, six Nightriders, six Twilight Reapers and six Sowers of Chaos. The 72 pieces are shuffled and randomly allocated face-down to squares on the board as in regular Fairy Eater Chess. The White turns up a piece to begin the game. The second player then makes a move, and the two alternate until the game is finished. There are three kinds of moves. A player may turn a piece face-up, move a piece, or capture an enemy piece. Turning over a piece Turning a piece face-up is a legal move if there are any face-down pieces on the board. Once revealed, a piece may move, capture, or be captured. Moving a piece A player may only move face-up pieces of his own color. All pieces move and capture just like they do in Fairy Eater Chess. Capturing an opposing piece Face-down pieces may only be captured by the
Post a Comment
Read more 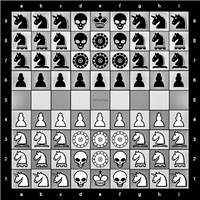 You can play Live and Daily Fairy Eater Chess here  https://games.dtco.ru/map   Easy registration, no email required. My special thanks to Valentin Chelnokov (Валентин Челноков)!!! You can play Live, Daily or against AI here  https://www.omnichess.club/variant/b69f811c-d68c-4e10-ae25-387651e484fc AI play very weak, but in order to understand the game they are perfect. Keep in mind that Nightrider is depicted a little differently on omnichess.club than we are used to.
Post a Comment
Read more 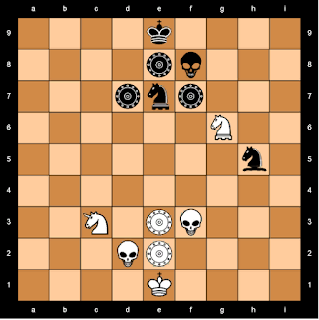 Solving any chess problems develops attention and trains memory, develops the skills of predicting possible options for further development, makes you think over the strategy of your actions with an emphasis on winning, and also teaches you to achieve your goals. Here will be presented simple puzzles with solutions that will help you appreciate the beauty of Fairy Eater Chess. *** White to move and mate in 2 Uncomplicated and simple - a direct attack on the Black Sorcerer decides the outcome of the battle in White's favor: 1. Rg9+ Rf9 (the only answer for Black) 2. Rxf9#  the Black Sorcerer cannot capture the Twilight Reaper, since square f9 is controlled by the Nightrider standing on c3. *** White to move and mate in 2 Prevent the Black Sorcerer from approaching the Sower of Chaos 1. g6=N Sa8  Now square a8 is the only safe square for the Black Sorcerer, since a9 and c8 are under attack by the Nightrider on g6. 2.Cc7# *** White to move and mate in 2 The pawn promotion decides ever
Post a Comment
Read more